As someone who has played roguelikes for hundreds of hours, it’s a bit embarrassing to admit that I’m still only average at the genre. Risk of Rain aside, there’s not a single game I could play a complete run start to finish without much effort involved. Sure, I’ve completed games like Necrodancer or Wizard of Legend before, but I’m not able to just name an item or build and deftly beat the final boss in one run like some people you see online.

For this reason, my interest in these games lies primarily in the base game mechanics, and without that to grab me I find myself drifting away from a game quite quickly. For the initial “interest grapple” as I’ve dubbed it, Caveblazers easily wins me over. 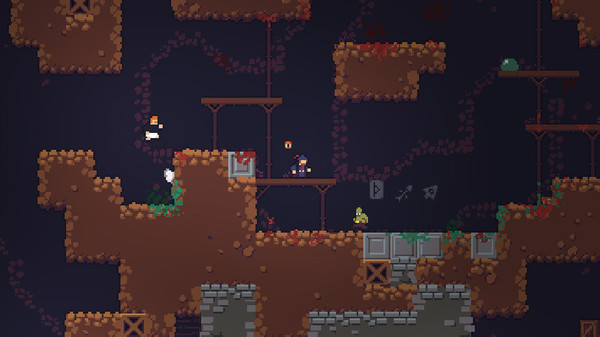 The premise of the game is as you’d expect just by looking at a few screenshots. You enter the cave from a door in your home base while an old man calls you suicidal, and try to descend as deep as you can before you’re written off by some monster in the way. You’re given two primary weapons (sword and bow), and different starting gear depending on the perk you choose. The default loadout gives you two bombs and an apple to snack on, and an early unlock is the archer perk, which reduces your melee damage in exchange for a better focus on ranged weaponry.

The most interesting one I’ve discovered is the Vampire perk. You take 40% off your maximum hp and lose health every few seconds just for being alive. In exchange, you gain health back for killing enemies and double your damage dealt. It’s very satisfying and encourages a hastier playstyle, as you have to quickly speed through levels polishing off any goblins you come across, just in case you beef it before going through the next door.

The combat is a mixed bag. Melee feels satisfying when you’re cutting down swathes of mobs and coating the walls and floor in blood. As you can see from the screenshot, the gore is persistent, and the end of an extended fight can look like you’re actually a decorator who forgot all but one colour of paint. Enemies break apart and fly away in two when you finish them off, and slimes tend to pop in a shower of sludge. You can do a sword pogo (like Link’s down air) when you’re falling, and it’s very fun to jump thirty blocks before bisecting an unsuspecting enemy at the bottom.

Not so satisfying are some odd hitboxes you’ll encounter. Enemy swings can sometimes hit you when you’re even inside them, and the way slimes work can lead you to some deaths that leave you saying: “Really?” The excellent sword pogo doesn’t work on slimes who have just started their jump, so you just get batted away for 10 damage if you weren’t expecting them to leap. Parries are also a weirdly implemented mechanic. If you swing at the same time as another enemy, you’re both knocked away and dealt 0 damage. This doesn’t sound too bad until you’re set upon by the other four enemies you’re trying to deal with at the same time.

And the ranged, oh my god the ranged mechanics in this game are near insufferable. You’re expected to be playing the game on a controller or keyboard, and you can only shoot in eight directions. This doesn’t sound terrible, and some games implement this well, but in Caveblazers your targets can be small, and missing a shot might result in you ending your run. Just to taunt you, some enemies in the game actually do have 360 degrees aiming, making you wonder why you’re not allowed the same benefit.

Chargers are tiny enemies that launch themselves directly at you. If they make contact they explode, dealing a large amount of damage and destroying surrounding terrain. If they die… they still explode, so melee is out of the question. Instead, you must rely on the most finicky bastard controls I have ever had the displeasure of using in a roguelike. Some shots require you to jump and fire at just the right time, but the single shot you loosed isn’t even enough to finish off the thing, so it just goes ahead and hits you anyway. It’s very frustrating to play against, and the best course of action against these things is just to run on by.

Some bosses also basically require you to use the bow exclusively, and without your ranged attacks, you’re near enough pantsed. This means you can only really stand in three places in the boss room (Below it, and at 45 degrees either side of it), limiting your space for dodging. Combining this with the large health pools a lot of them come with, it really makes some battles a slog.

Notably among these is Goliath. It looks like a flying Tetris piece but with one square being replaced by an eyeball. The two fists will always try and hit you from the side or above and are solid so you can hitch a ride on them. The intention of the fight is either to shoot him with a bow (guess how that one goes) or climb on top and swipe at his eye with your sword. The fists move randomly, so you’re not always guaranteed to be able to get up there, and he tends to stay in the middle so you can’t jump off the high arena walls to him either. If his health was shorter, then this would just be a challenging fight, but at the moment it rapidly descends into tedium.

As is a staple in the genre, you’ll spend your run gathering gold and items to power up, and use items with a cooldown are also offered to you. Most of the weapons are simple stat changes, but some offer unique mechanics like the scythe that powers up every time you place it on an altar or the bow you have to charge up to fire powerful shots. You’re offered two ring slots as well, but again, the bonuses aren’t usually much more than number changes.

You can meet AI adventurers along the way who are more than happy to join you for a while if you help them in a fight. They’re not the cleverest half the time, so it’s not unusual to watch them kill themselves only a few seconds after you’ve met. They soak up a bit of damage in boss fights at least. They did make me wonder about multiplayer in this game, and I ended up finding an online coop mod on the steam store. I haven’t tried it personally, but it seems good.

The graphics in Caveblazers are perfectly serviceable, but not memorable in the same way Enter the Gungeon or Binding of Isaac are. It’s clear what every enemy is meant to be, but none of them are particularly interesting. Flying skulls, bats, imps, giant worms… It’s nothing you won’t have seen before. Again, not bad, just nothing to write home about.

Undergrad Computer Science student at UWE Bristol. President of the Karate Soc 2020-21. In his free time, he plays PC/Switch, bashes his head against Unity, and is in a barbershop choir. View all posts by coendalby